HIJACKING STOPPED IN ITS TRACKS!!!01/12/2021Eersterust PretoriaOur GAC was out in the Eersterust guarding technicians that were busy working/repairing a cellphone tower. Around 13h30 the team noticed the vehicle driving up in the street when suddenly a group of men stormed the vehicle. The reaction team realized that they are bus hijacking the vehicle. Our team rushed to the aid of the driver of the vehicle and managed to stop the hijackingThe suspects fled on foot in various directions.No one was injured in the event#gacsecurity#gacguarding #gacresponse ... See MoreSee Less 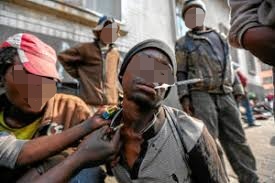 Nyaope (also known as whoonga or wunga) is a highly addictive, dangerous and destructive street drug, unique to South Africa

A single hit can cost as little as R30 for a parcel or straw and is smoked by heating the cocktail of ingredients and inhaling the fumes or to inject it with a needle in their feigns. The blood drug solutions are then extracted from the feigns and injected into their partner to save money. this process is called “BLUETOOTH”

Nyaope is a cocktail of illegal drugs

Both heroin and dagga, which are the main narcotic ingredients of nyaope, are listed as undesirable dependence-producing substances in the Drugs Act.

The effects of nyaope include:

The low-grade heroin used means one can get toxic side effects such as skin diseases, frequent infections and lowered immunity.

Because nyaope is smoked with dagga, the user becomes addicted to dagga as well.

Dagga can have side effects such as hallucinations, paranoia, flashbacks, changes in eating habits, weight loss, and restlessness

Nyaope users usually begin to neglect their school work or their jobs, and may eventually quit work or school altogether.

Users need extra money to pay for the drugs also increases, and this often leads to criminal behavior when they no longer have legal access to money.

Because nyaope is so addictive, addicts may become violent when they are unable to access the drug, and may commit violent crimes even against family members or friends in order to get money.