There were 4 spiking incidnets on the N4 between Diamondhill plaza and the N1 ... See MoreSee Less 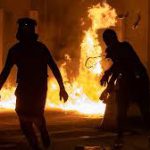 We received a call from nervous community members stating that a farmer’s “field” is being burned by illegal land occupiers/ illegal land grabbers and they are threatening to kill the farmer and his wife.

Upon arrival, there was a team of local farmers at the main gate. I teamed up with the local farmers in the area to assist the farmer in need. When we entered the farm, we noticed informal houses being erected by the minute.

As we made our way to the main house, we tried to keep a low key when entering the premises so that we wouldn’t “upset” the land grabbers and draw unnecessary attention to ourselves. Most of the farmers made their way to the house on-foot through the bushes.

We managed to successfully make our way to the house as the tension filled the air. While the farmer and house owner briefed us on the situation that was currently taking place, we heard gun-shots and whistles blowing. With each minute that passed, the noise from the whistle sounded and felt like it was coming closer and closer rapidly. This was at this point when we realized that the land grabbers started their gather in front of the gate.

As the land grabbers were busy illegally occupying his neighbor’s farm as well, authorities tried to evict the invaders as best they could but failed in doing so as the invasion quickly escalated onto the neighboring farms.

We set up a perimeter around the house in the event of a safe extraction for both the farmer and his wife that was living on the property.

The angry mob crowd gathered at the front gate swearing at us and singing songs while acting barbarically. A few minutes later the rocks started flying our direction and soon after, the first burning tire was thrown into the property. By this time we knew that is was going to be a very long day as we were only 7 people standing tall against a mob of over a 100 strong. Never the less, their humiliating intimidation tactics did not work against us. We called the local authorities for assistance and stood our ground.

In every riot or unrest, waves of attack happen in sequences. The mobs will usually start out strong but will fade an hour or two during this unrestful period. They will then use this ‘fade-period’ to regroup, refuel, and rest before the next wave of unrest is unleashed. They will however usually leave a small group of people at the intimidation point, just to keep the fires burning. When the illegal land grabbers came to their rest-faze, we took the liberty to send in informants and undercover members to get us more reliable inside information. It was to our advantage that our undercover informants managed to produce more than just inside information but also managed to confiscate the Molotov-cocktails they were busy compiling to throw at us in the attempt to burn us out.

For each minute that we endured the stoning, the shouting, the cursing, and the burning tire smoke, it felt like an eternity.

The authorities finally managed to get to the scene but it was only a short-lived matter, because as soon as the authorities left, it was just the farmer and us, the community, left vending for ourselves yet again. By nightfall the mob of landgrabbers dispersed and left the scene.

This was far from the end of them though. Throughout the night, scattered groups of the mob tried flanking us in the attempt to gain entry to the premises from the back, front, and sides. But yet again, they were unsuccessful in their attempts.

Throughout multiple discussions with the farmer and owner, we decided that we will stay by his side until it has come to a time deemed absolutely necessary to vacate the premises. We were adamant to fight for this farmer’s land as this was not only his land but also their home that they lived in for many years, his children grew up in this home, they built and farmed on that land which they paid for for many years. Now, because a group of people felt like taking the law into their own hands and illegally invading land and property, they expect this farmer to happily just surrender it all at no cost?

I am sorry but it doesn’t work like this

The community members and farm owners started reaching out to various organizations to assist against the battle of the farmer to save his home. Some organizations just turned a blind eye on the farmers’ outcry while others all had the same excuse” you are not a member of our organization and that’s why we can’t assist you” (Yes I also couldn’t believe it, but it is the blunt truth)

The following day we decided to set up camp at the farmer’s house. We all came to terms with the fact that we needed to stay on-site 24/7 until the situation was fully resolved.

The farming community guarded the premises day and night. I remember us sleeping on the porch of the house, working and walking shifts throughout the day and night. This continued for roughly 2 weeks. Throughout this time, our spirits weren’t broken. Our morale was above and beyond positive. We remained focussed and target driven as we couldn’t forget the reason for being there in the first place.

While operating under these intense times, we, as a community still managed to raised funds for food and drinks for the individuals on-site that remained on full duty. This alone was an indulging task but by standing together it was also a successfully executed one.

During this 2 week period, the mob went to the wheat farmlands of the neighboring farm and set it alight as an act of intimidation. Hundreds and thousands of rands of damages were caused to the crops. But still, we had to vend for ourselves as we had to stay on duty and keep protecting the farm.

This caused many of us that stayed on duty at the farm to put in leave at work in order to be on-site with the rest of the community. I wasn’t the only one making big sacrifices for the farmer. While we guarded the farmer’s farm, our own families were sleeping at home, alone.

We didn’t help the farmer for fame or money. We helped, because it was the right thing to do. Throughout these couple of nights, my eyes dramatically opened. On the floor under the porch and between those 4 walls, I experienced real comradery from people that didn’t even know each other.

The court issued an eviction notice to evict the land grabbers from the land but the eviction didn’t have the immediate effect that we had hoped for.

To the illegal invaders, the court order was just a piece of paper. a Piece of paper that didn’t scare or stop them from continuing their unlawful behaviour. Throughout the day and night, we could still hear them erecting their houses (Shacks). We knew that the risk to our safety grew profoundly by the day.

As the situation escalated, D-day drew closer. I could see the sadness and heartache in the farmer’s eyes as he realized that he was facing some seriously big decisions during the next few days.

The first big decision the farmer had to make was to give the go-ahead on the removal of their belongings. We could only make this happen throughout the day as the land grabbers noticed the truck and trailers moving in and out of the property. At this point, the illegal invaders did thankfully not give us any troubles.

The second big decision he had to make was to sell his house and farmland in order to protect his family. I clearly remember the atmosphere that roamed the air as the last bits and pieces of the house were cleared. Complete disbelieve and frustration filled our hearts as we felt powerless and alone in the battle against this barbaric behaviour.

But what troubled us even more was the fact that not even 24 hours after we safely evacuated the farmer and his wife along with their belongings, the beautiful house they use to call home, were stripped to the bone and burned to the ground.

It was a very emotional time for everyone involved, but a true salute goes out to the farmer who made the right call just in time and who did what was needed for their own safety.

– LET US PROTECT WHAT IS YOURS –